Nightfall said:
@GXPaycheck OMG! Why did you post that!

Sorry about that 😁
One buyer had Frank modify his with a tab that kept the wheel blocks in place. I may do that down the road. Really have to torque them down. They work pretty good though!

2016 Stock - Sunroof, Inflator, Manual Trans and Brake Squeal
Joined Dec 31, 2016
·
88 Posts
I like the wheel idea, but it still would need sliding around on the concrete at the crucial point of just before contact. I may leapfrog that idea to one with wheels that lift under pressure, but that is a next weekend thing. Haha

This is the QJ pinch block. These are the same dimensions as the short blocks that come with the lifts.


I usually just slide each unit under the car and lift until just before contact. Then I move the jacks and blocks to fit.


The car is moved due to the way the lifts swing, so you will need to plan for room in front or behind.
Ground


Here is the clearance of the pinch blocks


I think the next two will be the more important images. Cleanance and height.

This is just the tape measure hanging... But it is about 17 inches if pulled tight.

Gnome said:
I like the wheel idea, but it still would need sliding around on the concrete at the crucial point of just before contact. I may leapfrog that idea to one with wheels that lift under pressure, but that is a next weekend thing. Haha

I think the next two will be the more important images. Cleanance and height. View attachment 287990

This is just the tape measure hanging... But it is about 17 inches if pulled tight.
View attachment 287991
Click to expand...

This is excellent info! Thank you so very much for making time to take the pics and post!

Nightfall said:
@GXPaycheck OMG! Why did you post that!

Nightfall: we have a lot in common: cars and TV shows; love futurama.

Joined Mar 11, 2014
·
7,169 Posts
Finally able to use the Quickjack today. Used the factory lift points after scaring the piss out of myself at setup last week. After assembly, proper bleeding, etc., I rolled the jacks under the SS and gave a preliminary go. Looked good, up again. Uh oh. Losing hydraulic fluid at a quick connect, one side dropping. Fortunately never reached a locking point, scrambled to lower car. Tightened fittings, up again, leaking still. Closer inspection showed leak at actual quick connect joint, not at threaded ends of fitting. Disconnected, reconnected, no luck. Disconnect, clean fitting, rotate fitting on itself a few turns, success. Back up, all good. Um, no. Did not reconfirm lift points between last two attempts. difference in settled vs lifted suspension combined with articulating lift had moved magnetic pinch weld lift pads. No damage, just freaked me out enough to use the factory lift points today. Aligned the outer rail of the Quickjack with the pinch weld rail, with the front pad all of the way in and forward, rear pad all the way out and back. This setup was effective and a bit more confidence inspiring if not ideal. Drawbacks to this setup would be a slightly narrower area to work in, and a slightly lower car. Quickjack includes two sets of blocks, a 2" set and a 3" set. The 3" set will fit on both the pinch weld setup and the factory lift point setup, with the pinch welds sitting lower and allowing the car to be slightly higher at max lift. Could add the 2" at the rear on the factory points, but not quite the front. Probably could lift and lower to add them, and may try this on both sets of lift points in the future. I will probably use the pinch welds more often than not in the future, but feel good about today's effort simply to get comfortable with the lift. Also feel a bit more confident in leaving the car up on those points for a bit while I do a brake fluid flush, change oil, replace the TPMS sensors and rotate the rubber. May sit for a week, and if those points were good enough for Holden they are good enough for me to be sure.
Overall, I am very pleased with my purchase. At setup I was less than happy and thought I threw away $1320.00. In the past I was able to get the car to about the same position with a floor jack, a block of wood, four jackstands and a bit of front, back, front, back and done with the floor jack. Never really felt good about having the front on two jackstands and raising the rear with the floor jack, so I did it in steps to minimize the angles. It worked, but I didn't like it. This I like. Once the leak was addressed and I became a bit more confident in the lift, it made today's effort much easier.
Drawbacks. Only a couple of drawbacks that I can think of. The first is the weight of the lifts. They aren't light. Shipping on each shows 86lbs. per lift. Fortunately they slide quite well on my poly aspartic floor. I have hangers to mount eventually, although they may find a home directly under the SS now and again as my parking spot is tight and doesn't waiver by more than an inch either way. I will have to confirm the proximity to the exhaust for this to be considered as I don't want to heat up fluids or seals any more than necessary. The second drawback would be side access, which is eliminated by the jacks themselves. I believe Yoram had a lateral setup that worked in an earlier post in this thread, but I would rather just roll in from either end, having the entire driveline accessible from stem to stern.
Bottom line, I'd do it again. This will make working on the SS much easier, from exhaust to driveline to brakes and rotations, etc. It also made it much easier to see the bottom of my dirty car and a bit of residual seepage on three of four magride shocks... 😐. No runs, no fluid, no "wet spots" as it were, just dust covered moisture from who knows when. The TSB posted some time ago shows this particular condition as "acceptable" to GM, and I guess it'll have to be "acceptable" to me, and my wallet, at least for the time being.
Now, if they only made a creeper that lifted like those old people recliners. Dragging my old fat a$$ up and down off of the creeper all day was a chore. It's probably a good thing that I don't have a Life Alert pendant around my neck, I'da surely killed the battery today. Perhaps I'll mount a chrome handrail on the SS trunk. 😲

Pinetree said:
get you one of these - lol

I've seen that. Pretty cool, but I'd find a way to launch myself through a window or wall, it's just what I do...

Joined Mar 11, 2014
·
7,169 Posts
Had a go at the Quickjack on the pinch welds today. On one hand they do work well and are easier to line up, on another hand the lift points under the car are a bit less "nose down" as the rear pad is slightly higher, or recessed into the floor more than the front pad. I was also able to lift once, "tucking" the wheels in so that I could lower it down and add the second set of lift pads for the Quickjack. Between the second set of pads and the fact that I was using the pinch welds, moving the Quickjack assemblies farther out or away from each other, I did feel like I had a lot more room for 'ol fatty to roll around under the SS.
On another note, the pinch weld jack pads that I use are el cheapo flea bay specials, a little less than $29.00 for a set of four: 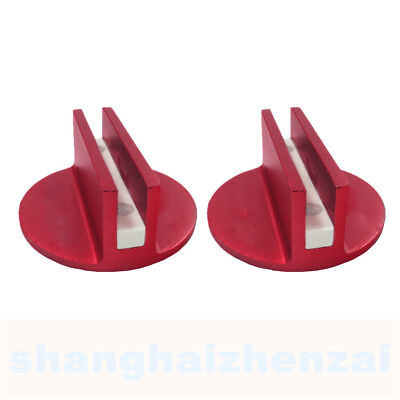 Joined Mar 13, 2016
·
44 Posts
I see they are selling a cross beam adapter now for cars with staggered lift points. Is this a better solution for our cars than the pinch welds?
Crossbeam Adapter

LawstInSpace said:
I see they are selling a cross beam adapter now for cars with staggered lift points. Is this a better solution for our cars than the pinch welds?
Crossbeam Adapter
Click to expand...

Wow, those look like a great (i.e. simple) solution. I never saw them mentioned on their website before. Are they new? Anyway, thanks for pointing them out.

LawstInSpace said:
I see they are selling a cross beam adapter now for cars with staggered lift points. Is this a better solution for our cars than the pinch welds?
Crossbeam Adapter
Click to expand...

You can use either the factory lift points or the pinch welds successfully. While this may be necessary in some applications, it isn't needed with the SS.

15SuperSport said:
You can use either the factory lift points or the pinch welds successfully. While this may be necessary in some applications, it isn't needed with the SS.
Click to expand...

Which model do you have, and do you keep the two sides truly parallel when you use the factory lift points?

good2go said:
Which model do you have, and do you keep the two sides truly parallel when you use the factory lift points?
Click to expand...